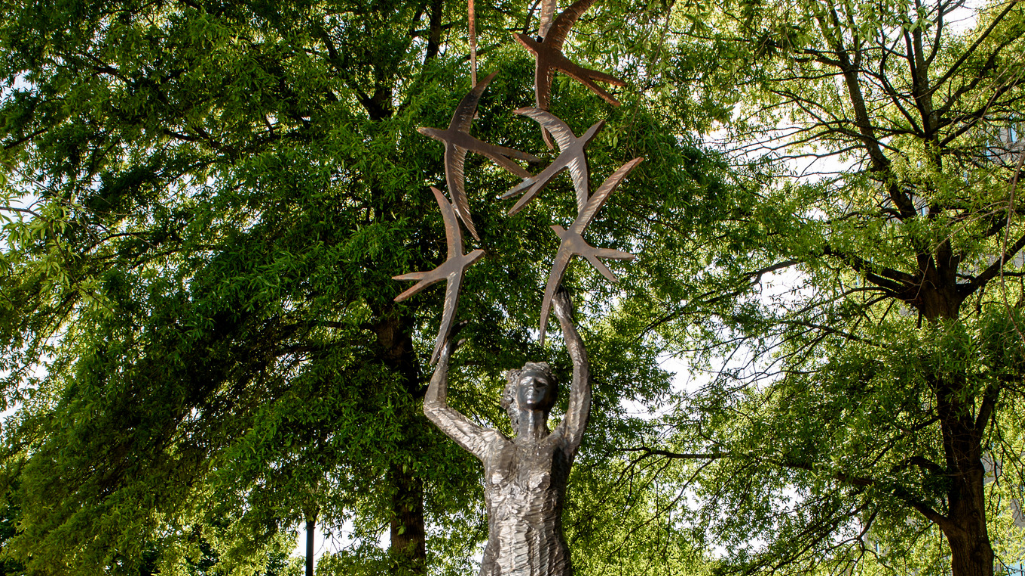 Artist Bio: Over the last three decades, the 62-year-old, self-taught artist has gained national recognition for his remarkable life-size and sometimes larger than life welded steel sculpture that have won awards and appeared in shows across North America from Montreal to California. His list of commissioned work includes a full-size steel buffalo for New Orleans art benefactor William Goldring and a nine-foot-tall steel rooster for the E. & J. Gallo winerys in California. Gallo is Italian for “rooster.”

Another dramatic work depicts the Greek mythological winged “Icarus” that now stands perched over the Tennessee River in Chattanooga’s River Gallery Sculpture Gardens. Closer to home, Whiting’s 24-foot-tall, 5,000-pound steel statue “Man Conquers Chair” stood on Poydras Street in New Orleans from 2012 to 2014 as part of the Helis Foundation’s Poydras Corridor Sculpture Exhibition. He is currently making a life-size statue of the proclaimed father of Zydeco music Amédé Ardoin for the St. Landry Parish Visitors Center at I-49 north of Opelousas.

The creative incubator for his art is located on five secluded, wooded acres east of Breaux Bridge where Whiting lives with his wife Michelle Vallot, a retired federal public defender, and founder-operator of Zydeco Foods. Their house, set in a large garden with a pond, rusting sugar kettles, round millstones, and his statues, is itself a work of art built in the 1960s by landscape architect Russell Dupuis.

Whiting’s journey to acclaim and to this little corner of the Acadiana is a classical existential story of self-destructive choices and self-redemption. Born in 1955 in Bastrop, Texas, at 16, his mother shipped the restless young Russell off to New Orleans to live with his sister and her husband. Two years later, twisted fate changed his life forever. Whiting killed a man in a fight when he tried to stop the older man from beating a woman.

“I knew her and had never seen that kind of behavior,” he says. “It freaked me out, no one else was going to do anything so I felt like I couldn’t abandon her. I was a peaceful hippie but things just got out of control, I was 18.” He was convicted of manslaughter and sentenced to 12 years in prison. In 1981, he received parole after serving eight years at Angola and correctional facilities in Pineville and Dequincy.

During his prison stretch, Whiting took college courses, taught himself mathematics, studied art and learned how to weld. He also enjoyed carving small wooden figures that he gave to other inmates. Upon release, Whiting went on to good-paying welding jobs in shipyards in South Louisiana and offshore drilling rigs. When those jobs dried up, he moved on to other shipyards along the Gulf Coast.

Then in 1986, he was in trouble again, this time in Georgia where he was convicted of possessing drugs. Facing a 20-year sentence, Whiting knew he had to change his life. He remembered a man who made a living selling his pottery at art fairs across the South.

Whiting decided that when he got out of prison, he would hit the art circuit with his woodcarvings. That opportunity came sooner than he planned. In 1987 he was paroled after serving just one year, when Georgia’s governor launched a crusade to clear the prisons to make room for DWI convictions.

Free again, Whiting returned to Louisiana to live with his sister and husband in New Iberia. There he launched his new life and career, selling his carvings at art shows. Along the way, he came across an artist cutting out steel figures and realized that he could create art with the welding skills he learned in prison and honed in the shipyards. Beginning in 1990 he was back on the circuit with his “carved” steel art that not only sold but impressed gallery owners who offered to represent him.

Since that time, Whiting has developed a painterly style of cutting and working steel unlike anyone else. Just as painters use brushes, paints and canvases, Whiting uses oxy-acetylene torches to carve graceful figures and mythological deities from three-inch steel plates that he purchases at local salvage yards. Each project begins with a concept either drawn from his imagination or commissioned.